The digital exhibition features images from archives, museums and heritage collections, giving visitors a unique insight in to the history of the Fort Elizabeth.

Steady growth of interest of the citizens of our countries in the pages of history, joint efforts in the field of preservation and promotion of historical and cultural heritage will help to revive communications between our people and to overcome the current decline in relationships between the countries. An opportunity to touch this joint history gives an extraordinary force of influence and raises awareness of participation of the two nations with each other. Additionally, it can give an enormous boost to Hawaii’s travel industry (specifically Kauai) and economy. We hope to attract the attention into restoring Fort Elizabeth to its full historical potential, generating global interest for academics, historians and tourists.
The Pacific region of the 18-19th centuries was the arena of joint development of new territories of both the Russian Empire, and the United States of America.

The Island of Kauai's historic Waimea River is famous as the initial landing site of Captain James Cook, the first European explorer to establish western contact with the Hawaiian Islands.

The Russian seafarers under the leadership of Georg Schäffer, an employee of the Russian-American company and the manpower of locals constructed three fortresses here.

In two years Schäffer built buildings for future trade settlements and three fortresses, having named them in honor of Alexander I, his wife empress Elizabeth and Barclay-de-Tolly. Up to now the remains of the stone Fort Elizabeth/ Pā ʻulaʻula, located near the mouth of the river Waimea still stands. Walls of the Fort Alexander and Barclay-de-Tolly were made of dirt and nothing remains of them now. On the site of the Fort Alexander located in the gulf of Hanalei a few remnants of the foundation remain. Barclay-de- Tolly's fortress was located near the mouth of the river Hanalei. Seafarers helped several hundred Hawaiian workers, who were provided by the King of the island with construction.

Fortress Elizabeth/ Pā ʻulaʻula - one of the main tourist attractions in Kauai is a National Historic Landmark and is part of the Fort Elizabeth State Historical Park. The complex of constructions of the Russian period have been recognized as a national American historical monument.

In 1815, a ship from the Russian-American Company was wrecked on the island. In 1816, an agreement was signed by Kaumualiʻi to allow the Russians to build Russian Fort Elizabeth. Construction was begun in 1817, but by fall of that year Russians were expelled. Perhaps Kamehameha feared they would support Kaumualiʻi in a bid for independence.

Kaumualiʻi was popular both among his people and foreigners who visited and worked on his islands. Captain George Vancouver, who had given the young king a flock of sheep as a gift in 1792, was thanked with a lavish banquet and described his host glowingly. Kaumualiʻi was described as handsome, likeable, and courteous, as well as a capable leader. He was sincerely mourned by the people of Kauaʻi. 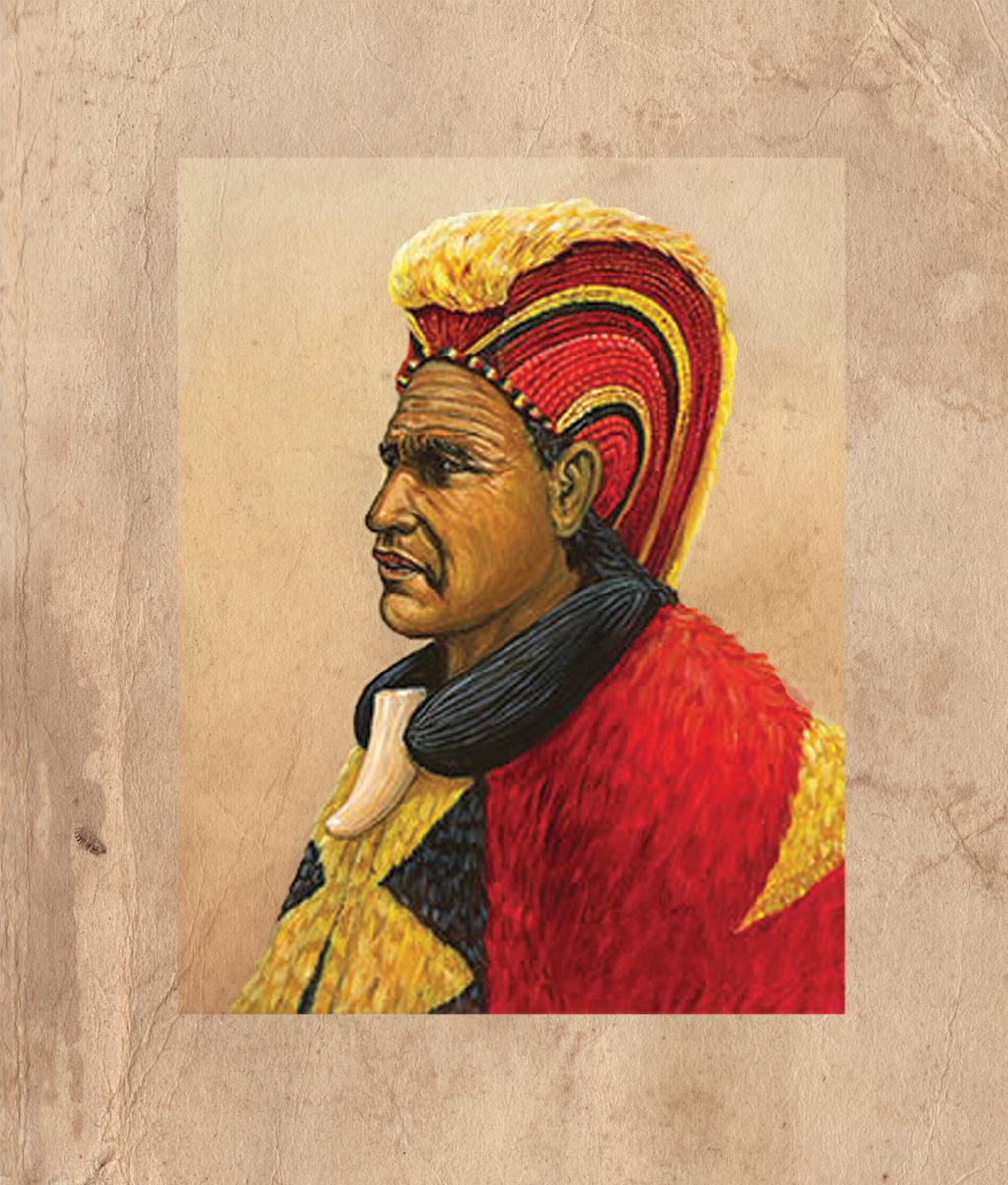 Georg Anton Schäffer ( 27 January 1779 – 1836) was a German physician in the employ of the Russian-American Company who attempted to conquer Hawaii for the Company and, ultimately, the Russian Empire.

In 1815 Schäffer sailed to Hawaii to retrieve the Company goods seized by Kaumualii, chief of Kauai island. A simple mission led by an inexperienced but ambitious physician unfolded into a major blunder for the Company. Kaumualii, who sought outside help in his domestic rivalry with king Kamehameha, invited Schäffer to his island and manipulated him into believing that the Russian-American Company could easily take over and colonize Hawaii. Schäffer, "losing all touch with reality", planned a full-blown naval assault of the rest of Hawaiian islands and sought support for his "conquest" in Saint Petersburg. Mounting resistance of Native Hawaiians forced Schäffer to admit defeat and leave Hawaii in 1817. 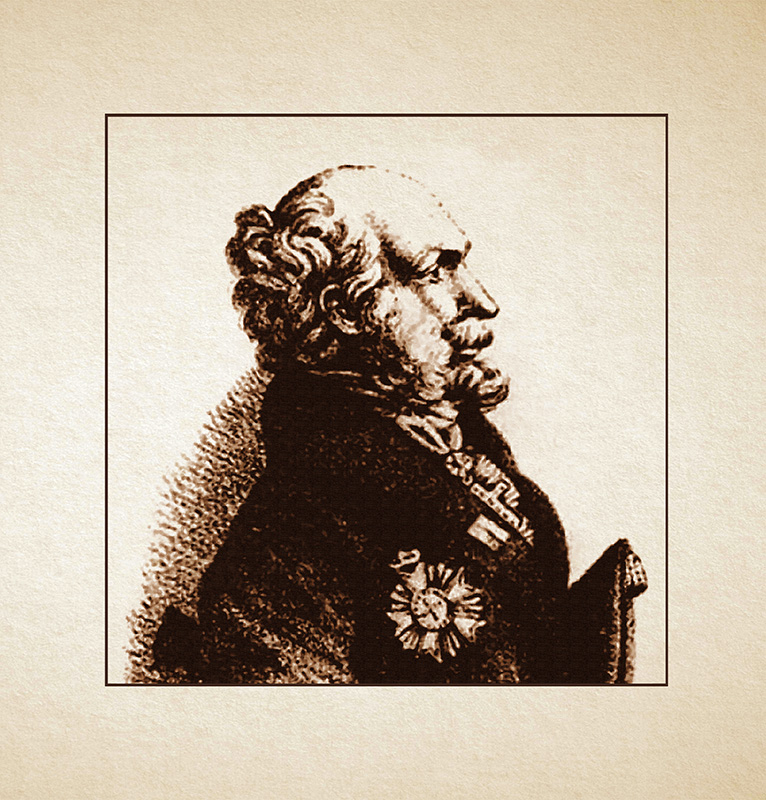 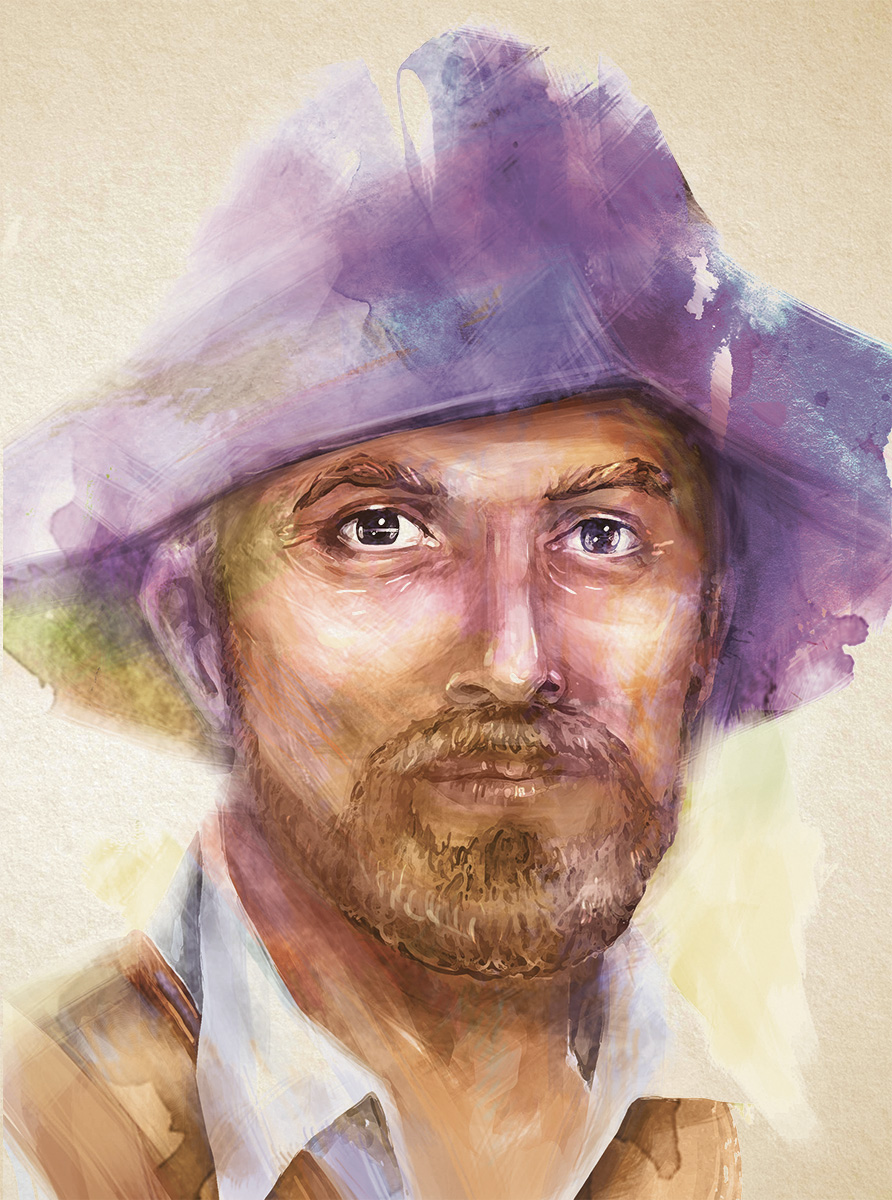 Captain James Cook (7 November 1728– 14 February 1779) was a British explorer, navigator, cartographer, and captain in the Royal Navy. Cook made detailed maps of Newfoundland prior to making three voyages to the Pacific Ocean, during which he achieved the first recorded European contact with the eastern coastline of Australia and the Hawaiian Islands, and the first recorded circumnavigation of New Zealand.

On January 20, 1778, near the mouth of the Waimea River, Cook spotted a potential anchoring site. He sent Lieutenant John Williamson ashore with three smaller boats to find a landing place and fresh water. Several hours later, Williamson returned with a report of an anchorage area on a beach located near a native village next to a lagoon of fresh water. Cook anchored a mile off the beach and went ashore with three armed boats. After establishing friendly relations with the villagers and local ali'i (chiefs), Cook visited the fresh water lagoon and determined that the water was acceptable for drinking. The next day, he made an excursion up the Island's valley, taking note of the village, native peoples, temples, cultivated trees, and crops. 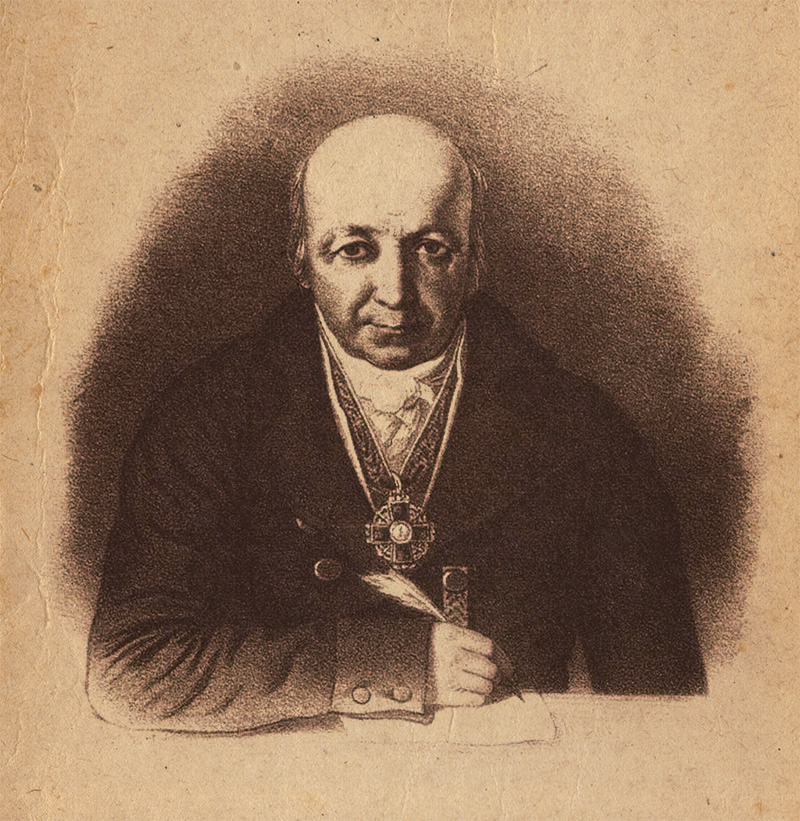 Alexander Andreyevich Baranov (1747–16 April 1819), was a Russian trader and merchant, who worked for some time in Siberia. He was recruited by the Shelikov Company for trading in Russian America, beginning in 1790 with a five-year contract as manager of the outpost. He continued to serve past the end date of his contract.

In 1799 Baranov was promoted, appointed by the recently chartered Russian-American Company as Chief Manager, effectively the first governor of Russian America. He served until 1818.

Kamehameha I (c. 1736 – May 8 or 14, 1819), also known as Kamehameha. A great warrior, diplomat and leader, King Kamehameha I united the Hawaiian Islands into one royal kingdom in 1810 after years of conflict.

In 1778, Captain James Cook arrived in Hawaii, dovetailing with Kamehameha’s ambitions. With the help of western weapons and advisors, Kamehameha won fierce battles at lao Valley in Maui and the Nuuanu Pali on Oahu. The fortress-like Puukohola Heiau on the island of Hawaii was built in 1790 prophesizing Kamehameha’s conquest of the islands. In 1810, when King Kaumualii of Kauai agreed to become a tributary kingdom under Kamehameha, that prophecy was finally fulfilled.

Kamehameha’s unification of Hawaii was  because under separate rule, the Islands may have been torn apart by competing western interests. Today, four commissioned statues stand to honor King Kamehameha’s memory. Every June 11th, on Kamehameha Day, each of these statues are ceremoniously draped with flower lei to celebrate Hawaii’s greatest king. 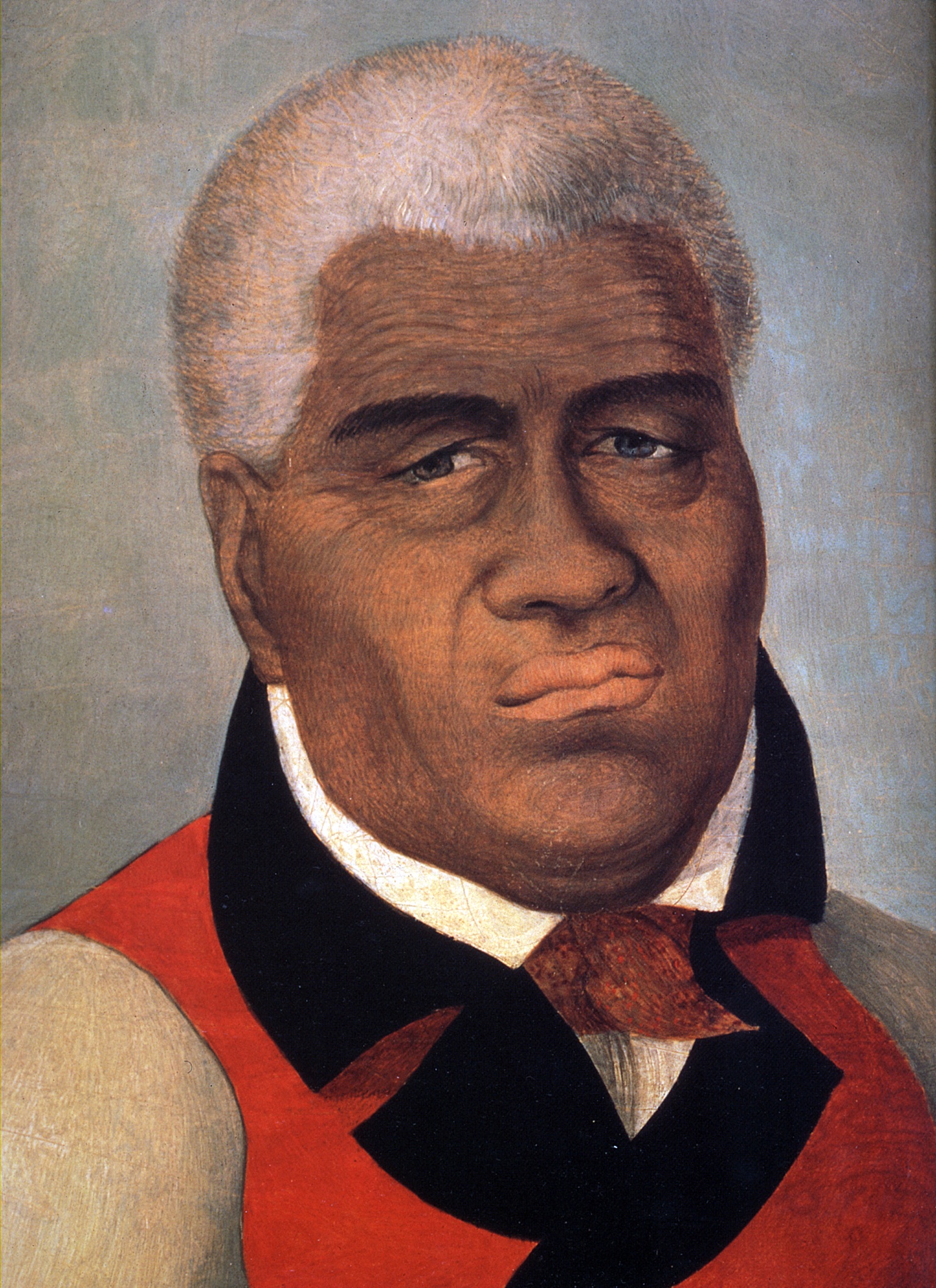 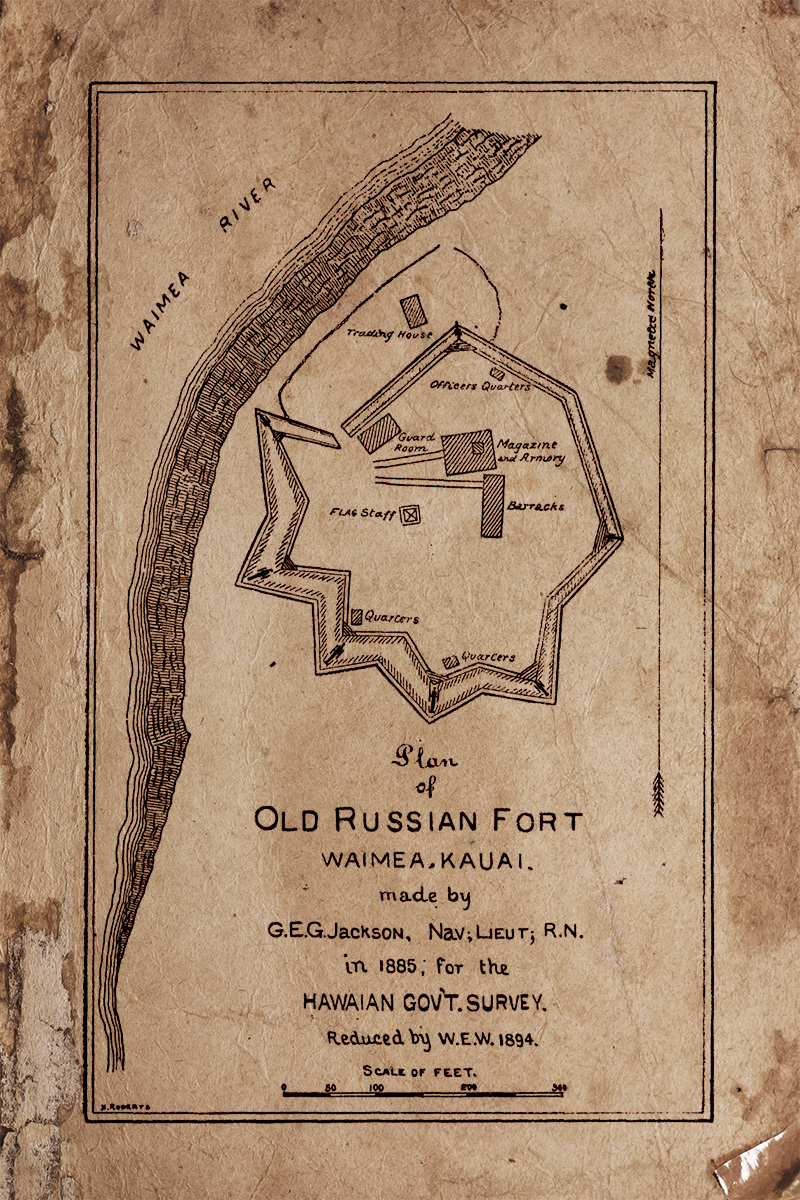 Plan of Fort Elizabeth by Captain George Jackson
Much of our present information on Fort features comes from Captain George Jackson’s map, drawn in 1885. The Daily Pacific Commercial Advertiser published the following about Jackson’s visit to Kauai (Honolulu 1885: May 18):
...It had probably never been kept in repair after the Russians left it, and now, after a lapse of seventy years, is nothing but a ruin. But it is interesting even in decay, and when Captain Jackson of the Hawaiian Government Survey, was
on the island a few weeks ago, he having a little spare time, made a very corirplete and careful survey of the ruin, and from his notes and sketches, has drawn a plan of the Fort as it stood probably at the time the Doctor was its com mandant. This plan evidences that considerable judgement was shown in the selection of the site upon which the Fort was built, and a great deal of labor expended in making it a really formidable work of defense.

Lithograph according to Bingham 1821(22). “Village of Waimea, Kauai” with the fortress on the left.

«The fort was not completed under the Doctor’s direction but so far finished that a number of guns were mounted on one side, the magazine built and a flag staff erected, on which the Russian colors were seen flying on public occasions.» (Whitney 1838:50) 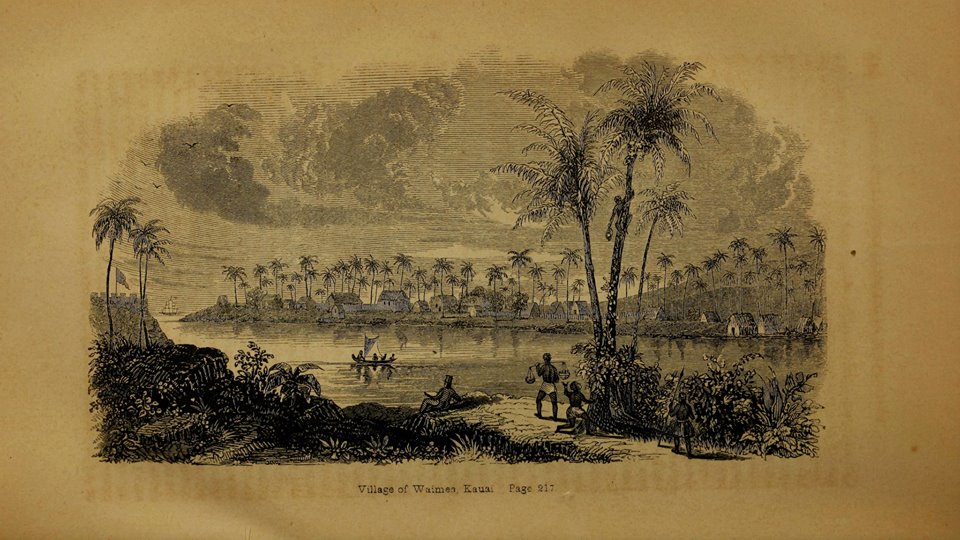 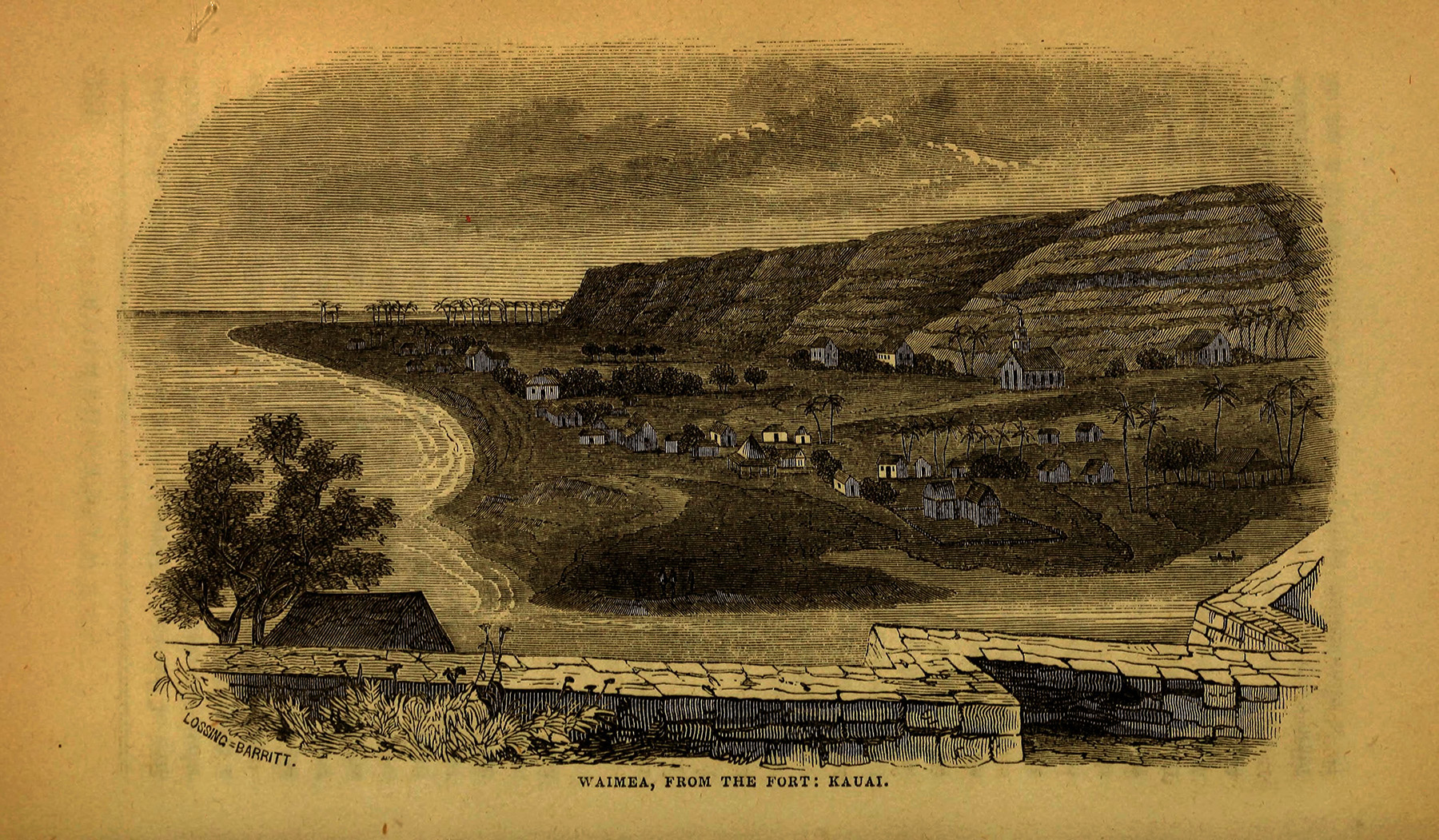 Capt. Cook in the Sandwich Islands, drawn by J. Webber 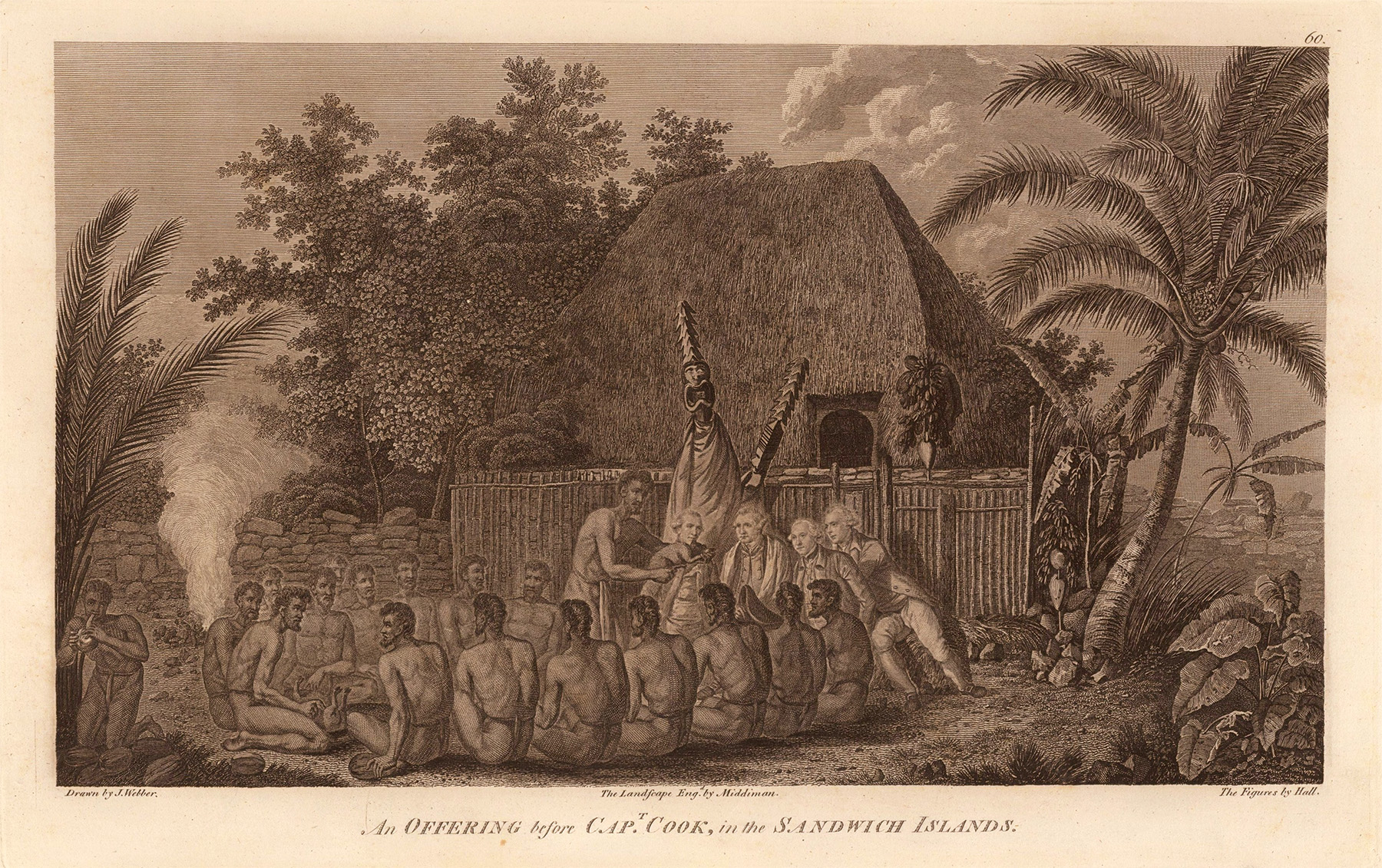 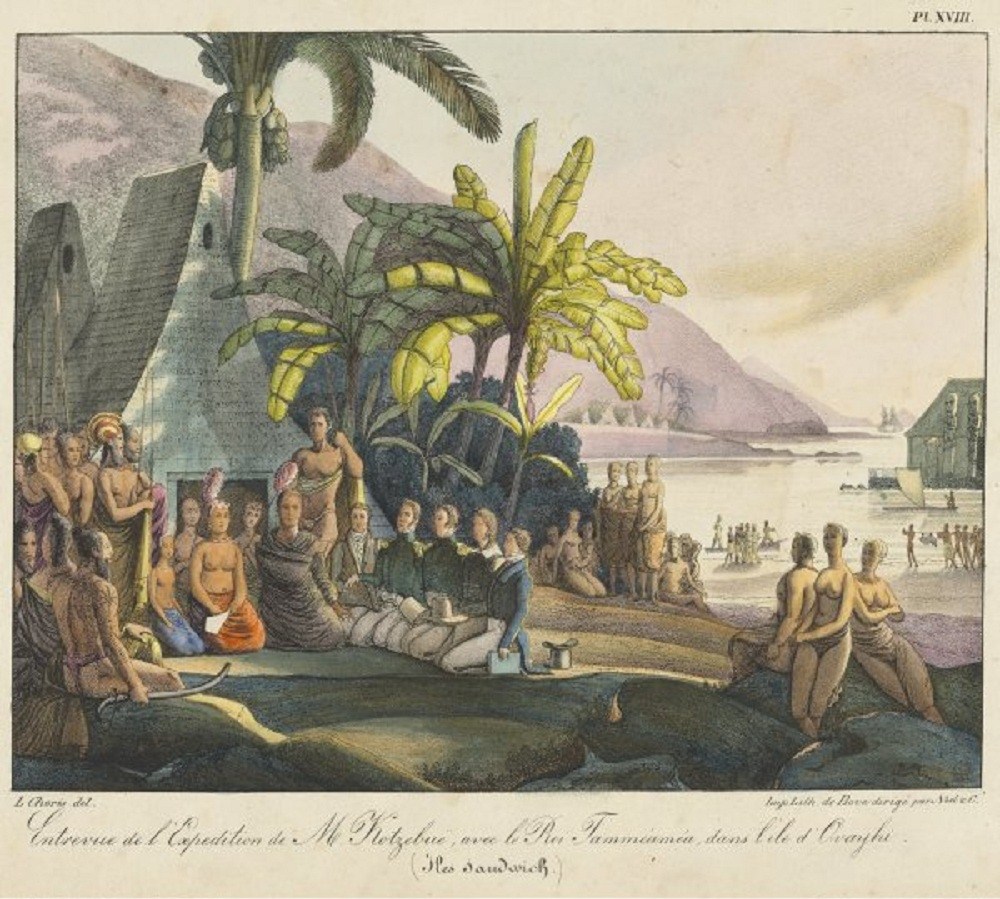 This lithograph by Louis Choris shows King Kamehameha
and Kaahumanu meeting with Russian navigator Otto von Kotzebue and officers in 1816 at Kealakekua Bay. 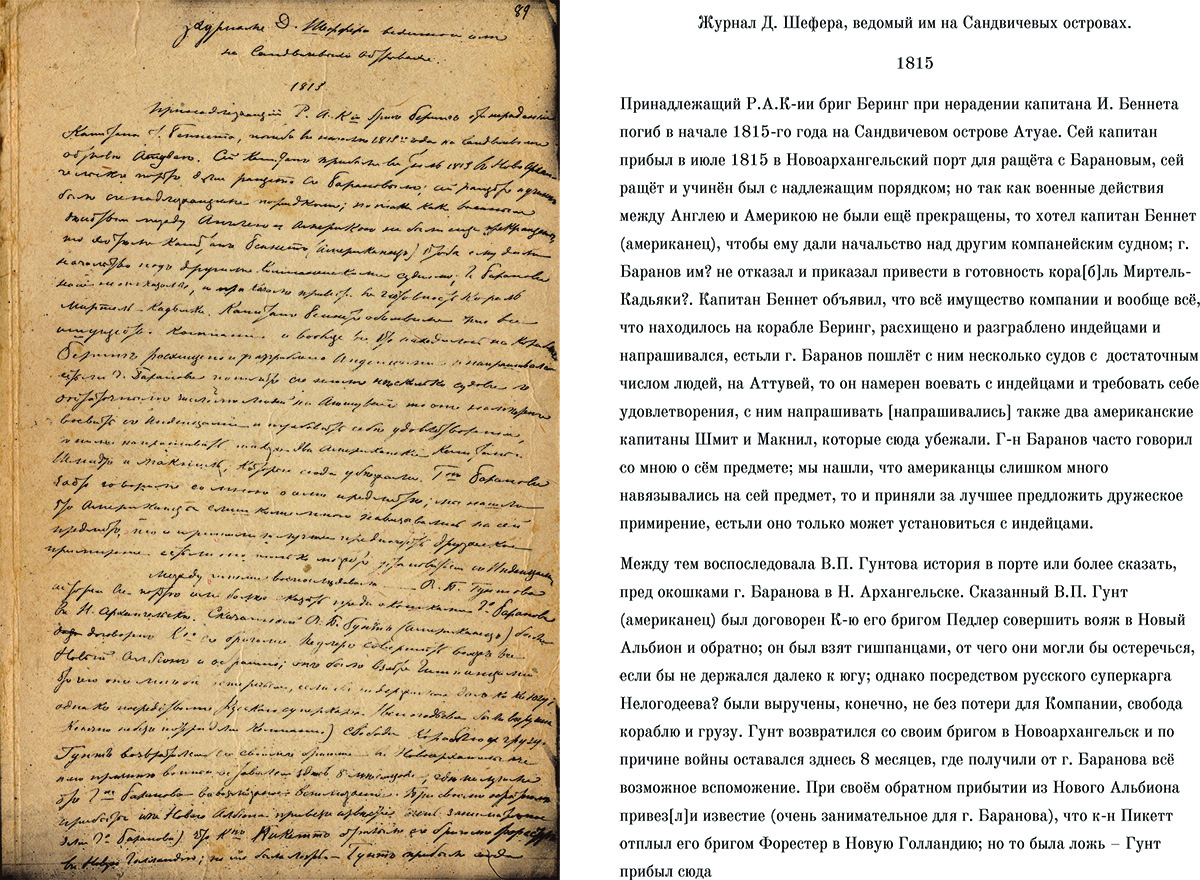 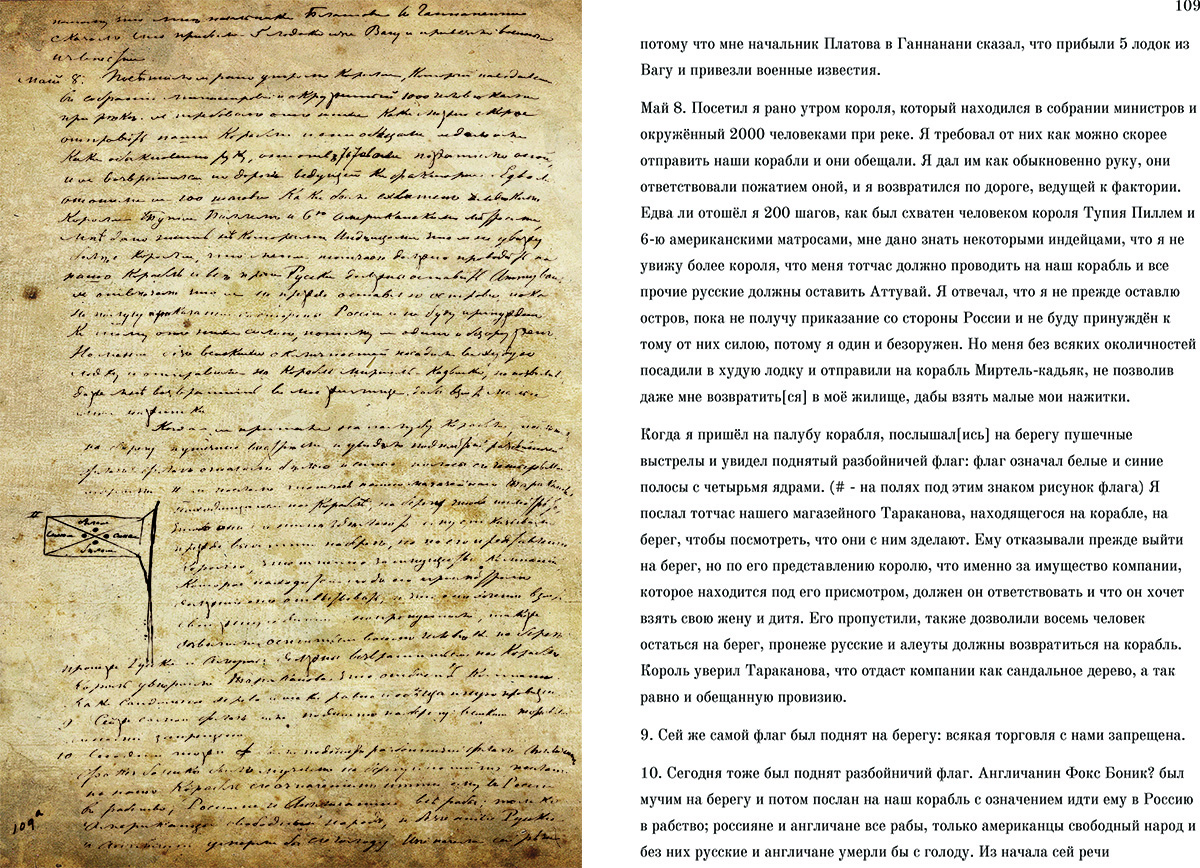 View on the fort Elizabeth from a bird's eye view 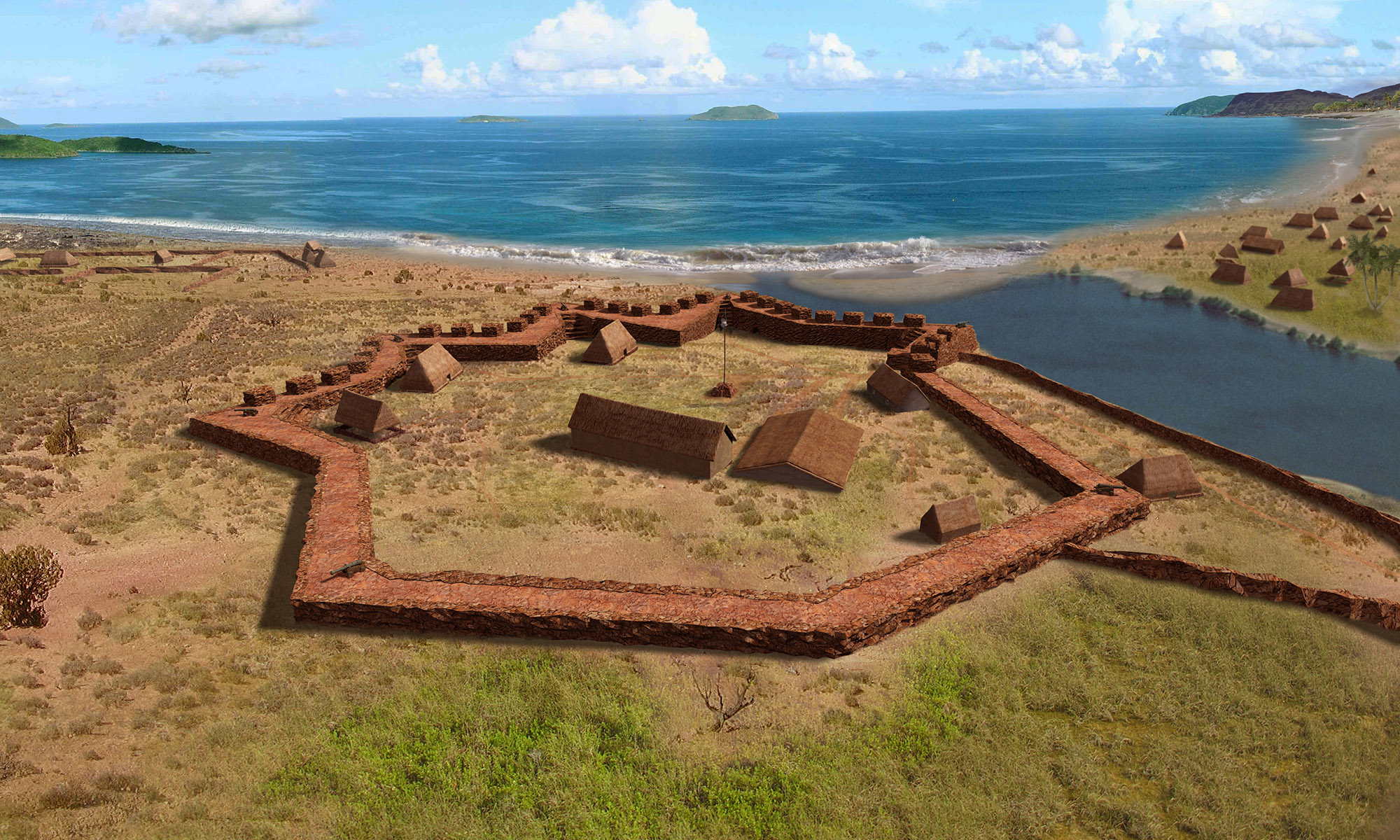 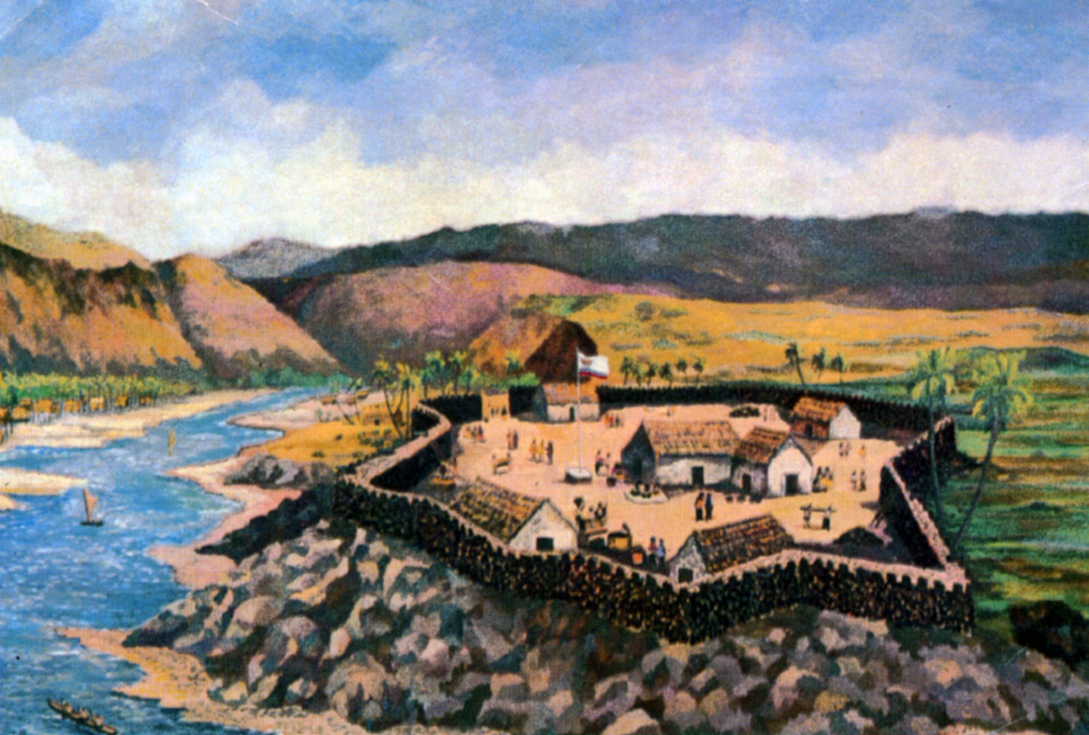 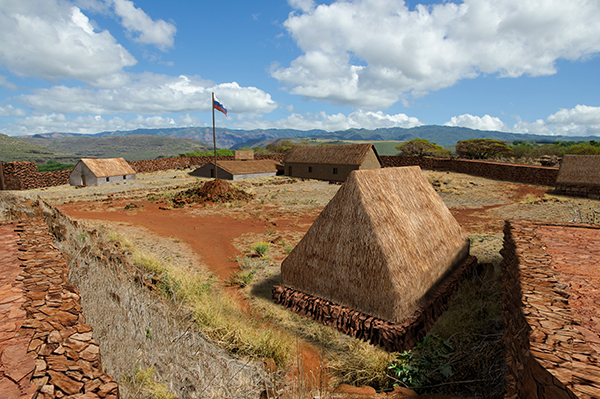 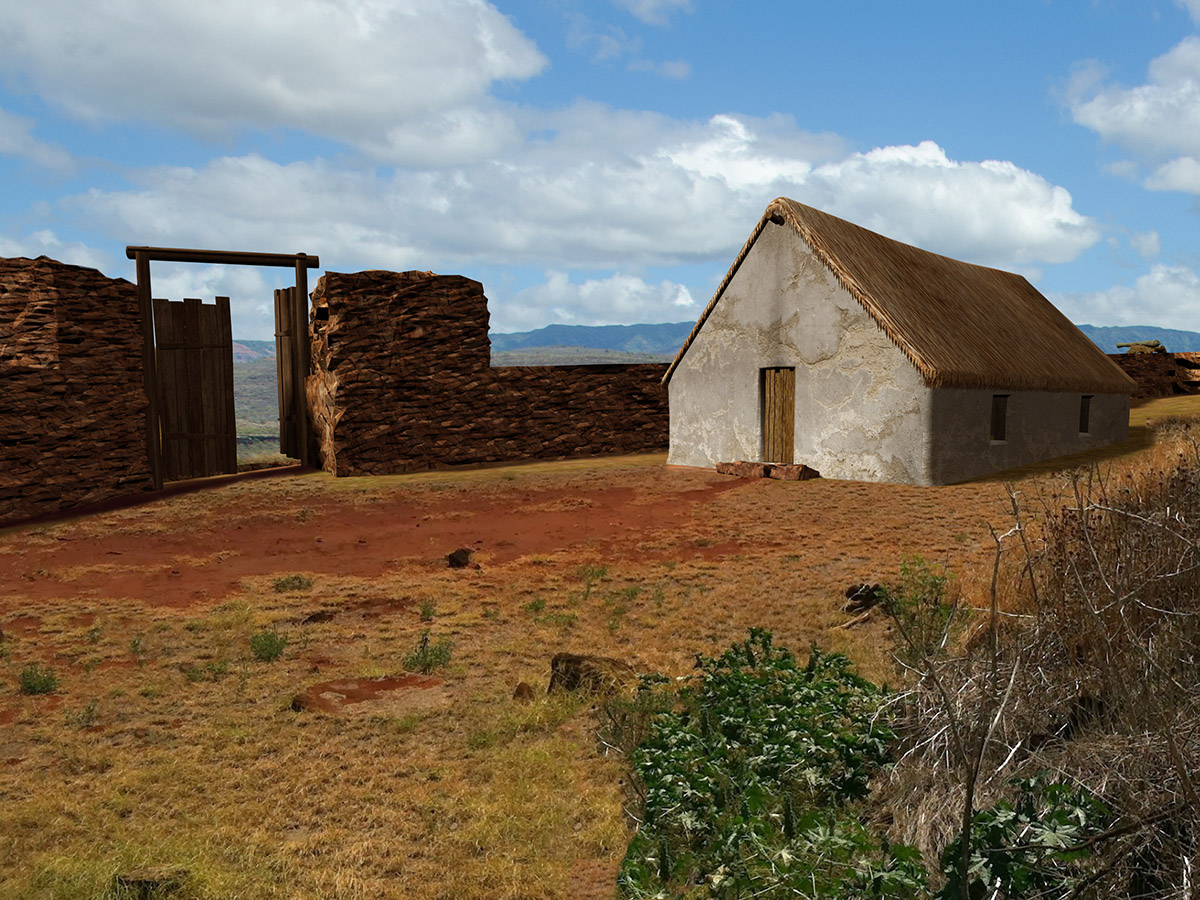 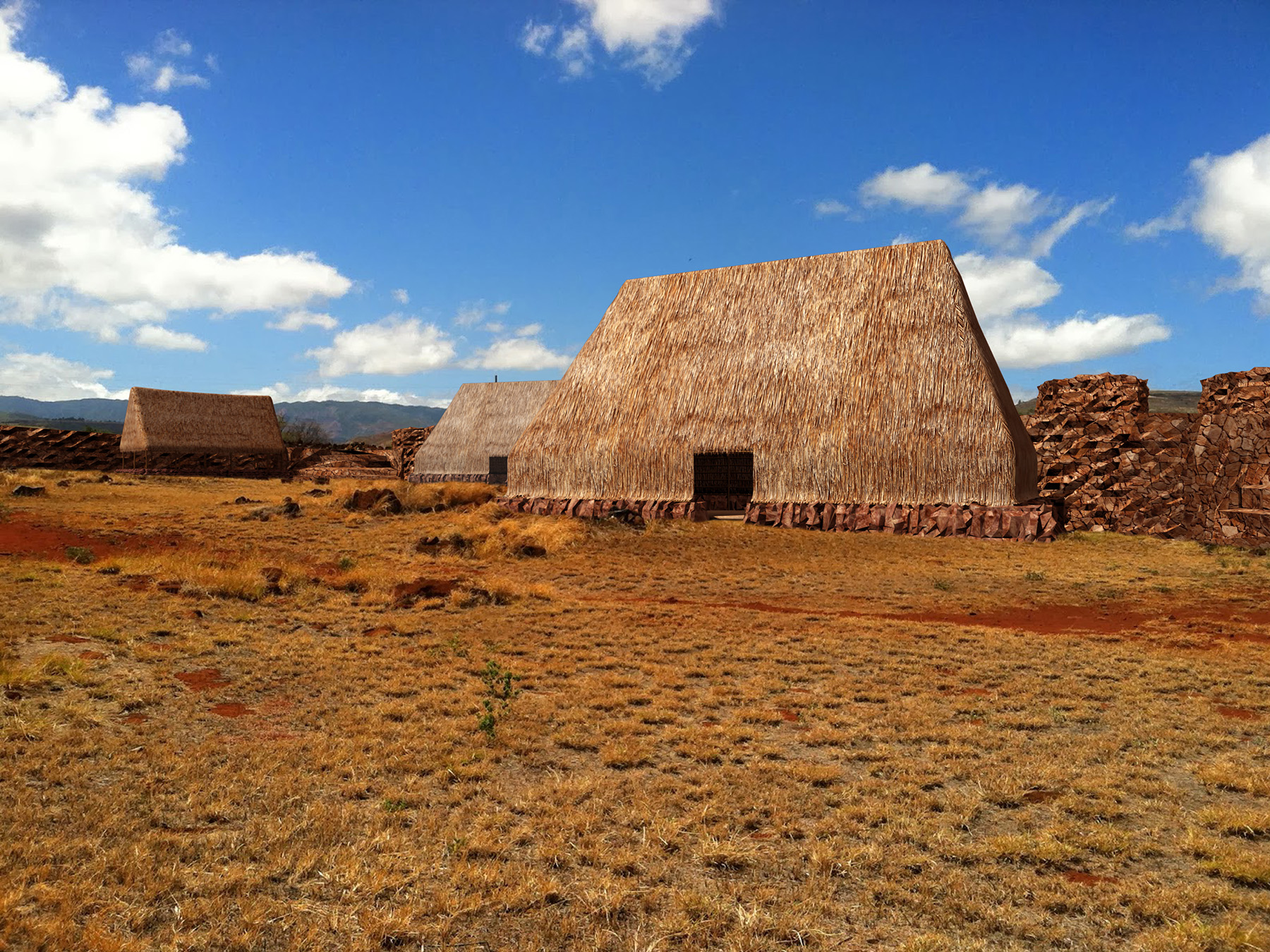